When Caleb was almost 2, I decided I was ready to have another baby.  We had always dreamed about having two kids.  We tried for months and months and months to get pregnant with no luck.  I’m a worrier, so with each passing month, my freak-out factor went way up!  And with each passing month, the more upset I got.  More frustrated.  More sad.  More angry.  More depressed.

When we had been trying for 2 years, I decided to go see a fertility doctor.  All my tests came back perfectly normal, so the doctor thought this was going to be easy.  I wound up doing three treatments with this doctor.  Clomid, injections, and IUI’s.  I had to take breaks in between months because I would develop huge cysts due to the drugs.

Looking back, I realize I was massively depressed.  I couldn’t think about anything for 2 1/2 years besides my pain and trying to figure out how to fix it.  I hurt extremely deeply.  But for the most part, infertility is something we don’t talk about.  At least I didn’t feel like I could talk about it.  It felt like no one understood me.  I felt alone.

During this time, my dear friend Stacy was already going to an infertility support group, so I finally decided to go with her.  Previous to this experience, I never ever thought I would step foot into a support group.  And had it not been for my friend, I probably never would have gone.  It proved to be a huge help.  It was great to realize that I wasn’t alone.  It gave me a group of people who knew exactly what I was going through, knew the terminology of the treatments, the feelings I was feeling, and the highs and lows of the journey.  I’m a fan of groups like these now.  If you need help, get it!  Find a group that you can connect with to help you feel as normal as possible.

After I found out my third treatment didn’t work, I hit my lowest of lows.  I had begged God to let me get pregnant before a few of my friends got pregnant with their second kids.  This is horrible, I know, but it shows how low I was.  One night, one of these friends called to tell me that she was pregnant.  The very next night, the other friend called to tell me she was pregnant.  This was more than I could take.  Chris was gone to a school event, so he wasn’t home.  I wound up having to call my parents to come take care of Caleb because I was absolutely hysterical.  My mom talked with me and did everything she could to calm me down, but I was a huge wreck.  Huge wreck!

The next day after this, I had another doctor appointment.  When I went in, I was told that I had another set of really large cysts, and I was going to have to wait three months to do another treatment.  And the doctor thought that the next treatment should be my last.  I wound up holding my tears in until I got to the parking lot, and then I lost it.  I called into work and told them that I was not coming in that day and went home.  I sat on my back porch doing everything I could to calm down until my mom came over to cheer me up.

Along the way through this journey, some friends had told me about an N.D. in Arkansas who had helped some friends of theirs.  I always thought that was kind of weird, but when I was out of options, I wrote a short letter to the guy and a few days later he wrote me back to tell me what he thought the problem was.  I immediately started taking the herbs that he had suggested, and after three days of taking the herbs (trust me!), I was pregnant.  I fully believe the Holy Spirit led my friends to tell me about this doctor, and that the Holy Spirit was at work in this whole situation.

When I found out I was pregnant, a ton of feelings and thoughts raged within me.  I was happy, but I still had a lot of emotions I needed to work through.  I was still angry and frustrated at how the last 2 1/2 years had gone.  And it took a good while to work through all of this.

When I was 9 weeks along, I had my first ultrasound and found out that I was pregnant with twins.  Because of all of the ultrasounds I had had over the last two years, I had gotten really good at telling what was on the screen.  So, as soon as the picture came on the screen, I knew there were two babies.  I knew before the new ultrasound tech knew. 🙂

The pregnancy was hard.  My back hurt like crazy while my body stretched and I became enormous!!  I wanted to do everything possible to make sure that the babies were healthy and minimize the chances of them being born too early.  So, I ate like crazy.  I went to work, but that was it.  If I wasn’t at work, I was at home laying on the couch.  I quit going to church…really anywhere.

When I found out that we were having a boy and a girl, I was really excited!  And on the way back to work after the doctor appointment where we found out, I realized how much of a blessing I had been given by God.  I had always wanted two boys.  Then after Caleb was born, I started praying for a girl.  On the car ride back to work, I realized God had given me everything that I had asked for.  I had to wait years to have another baby, but I felt like God was telling me that he had heard my prayers and blessed me more than I could have possibly imagined years before.

Sadie and Luke were born on February 2nd, 2011 during a crazy, crazy winter storm.  Sadie was 4 lbs., 15 oz. and Luke was 5 lbs., 15 oz.  They were three weeks early, but they were perfectly healthy and did not have to go to the NICU at all.  As I lay on the table waiting on my doctor to stitch me up after my C-section, hearing both babies cry was the most beautiful sound I may ever hear.  I lay on the table cracking up at how crazy the last 3 years had been, how crazy it was to have two tiny, tiny healthy babies crying nearby and how crazy things were going to be in our house for a while.

Sadie and Luke are my miracle babies.  After I found out I was having twins, I asked my OB and my infertility doctor if the previous month’s fertility meds had anything to do with me having twins.  Both doctors said the drugs had nothing to do with it.  The drugs were fully out of my system.

God had everything to do with it! 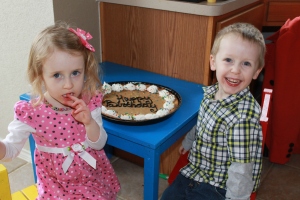 9 thoughts on “The Story of Sadie and Luke”